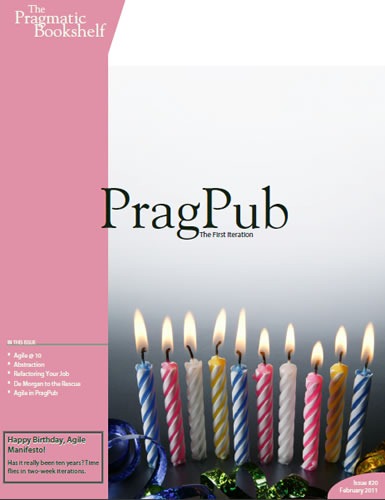 No matter what technology stack you build on, no matter whether you build for web, desktop or mobile., no matter what programming languages or developer tools you use, you should be reading PragPub. Put together by the publishing company behind such gems as The Pragmatic Programmer, Programming Ruby (a.k.a. “The Pickaxe Book”), The Passionate Programmer and Pragmatic Thinking and Learning, it’s a monthly e-magazine covering a wide range of programming topics, all with the intent of making your better developer and helping you make the most of your career.

The February 2011 issue of PragPub is a celebration of Agile’s tenth birthday. Ten years ago this month, 17 software developers of note – including Andy Hunt, one of the founders of The Pragmatic Programmer – got together at a ski resort in Utah, supposedly to discuss lightweight development methods. I am impressed that the end result of their get-together was the Agile Manifesto and the kick-starting of what we now know as Agile Software Development; I would’ve opted for hitting the slopes, turning apres-ski at the chalet into my own private beer commercial and generally turning the entire event into Hot Tub Time Machine. (I suppose that such a smart group of developers could’ve done both, but in a webcast last year, Andy told me and John Bristowe that the gathering was all business.)

To celebrate this occasion, ten of the authors of the Agile Manifesto, Andy Hunt, Kent Beck, Ron Jeffries, Jon Kern, Ken Schwaber, James Grenning, Arie van Bennekum, Stephen J. Mellor, Ward Cunningham, and Dave Thomas have each written a reflection on the programming movement they started, There’s also an article in which they look back at two years of articles on Agile in PragPub and there’s also a new installment of their regular Way of the Agile Warrior column.

This issue has other articles covering other topics. One I found noteworthy and which you might useful is Refactoring Your Job, an article on not just surviving, but thriving, in these economically precarious times.