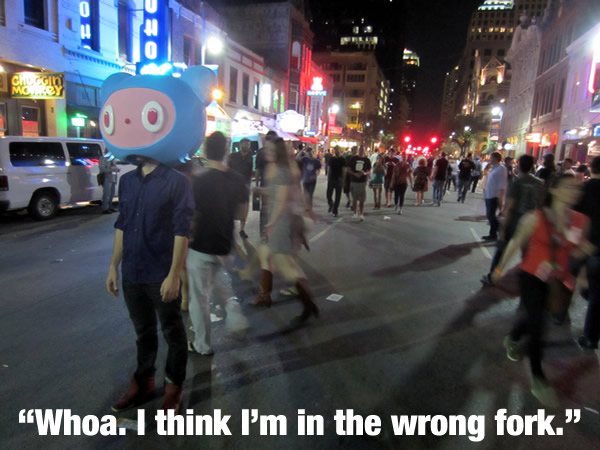 Octocat looks a little lost. I snapped this photo of a guy wearing a giant Octocat head while posing for photos on Austin’s 6th Street during South by Southwest 2012.

There are still many developers out there who seem a bit uncomfortable with Git and GitHub. If you’re one of them, these tips and tutorials mights help you learn and have fun along the way.

Githug: “Git your game on!” is this project’s motto, and it’s an accurate description. It’s a game where your objective is to get to the next level, and the way to do that is to use git commands.

Git Immersion: A guided tour created by the people at EdgeCase. It’s “learning by doing”; as the site explains, it’s inspired by the premise that to know a thing is to do it.

The Git Community Book: An online, collaboratively-written book creating by members of the Git community. A pretty thorough book on Git that’s also kept up-to-date. You should bookmark this one.

Mark Dominus’ Git Habits: Mark’s a serious long-timer on the ‘net: he’s been hacking on Perl since forever, founded  Kibology (anyone remember that?) and wrote Higher-Order Perl. He’s sharing the way he uses Git, and it’s probably a good idea to steal a few tricks from him.

Getting the Hang of GitHub: Once you’ve gotten good with Git, the next step is to get good with GitHub, the hosted Git service, which lets you  share your Git-versioned projects.

Let’s Suck at GitHub Together: My friend and fellow BarCamp Tour member Chris Coyier (the guy behind CSS-Tricks) has a great screencast on learning GitHub.

2 replies on “Learning and Having Fun with Git and GitHub”

Here’s the naive question: what’s not to be comfortable with?

That’s not Octocat, is it? Looks more like a Turntable.fm avatar to me.