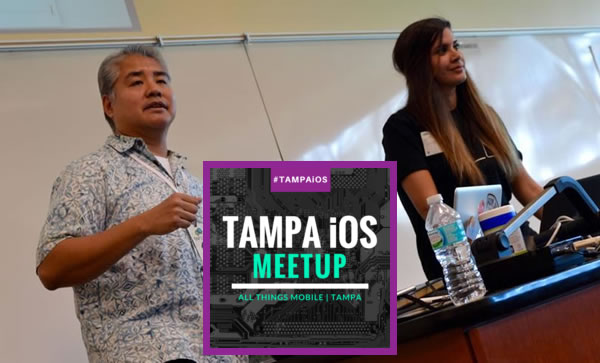 Last Saturday, Angela Don and I gave a well-attended presentation on getting started with iOS development using Swift. It went so well that we decided to make it a regular thing, and thus the Tampa iOS Meetup was born. We’re having our inaugural gathering next Wednesday, October 28th at 7:00 p.m. in South Tampa at 3825 Henderson Blvd., Suite 300, and if you’re interested in getting started with iOS development and Swift, or if you’re an old hand looking for another get-together of like-minded people, come join us!

Me and Angela presenting at BarCamp Tampa Bay 2015.

I had the great fortune of meeting Angela at OpenHack Ybor, Tony Winn’s monthly gathering of local developers and techies who enjoy catching up over beer and tech talk in Ybor City, Tampa’s party district (Here’s my recent writeup about OpenHack Ybor). She was talking about doing a presentation at BarCamp Tampa Bay 2015, I told her that I’d been thinking about doing the same, and a couple of days later, we had a full-fledged presentation where we demoed a couple of quick Swift apps and playgrounds.

If you’ve got an interest in developing for iOS, whether you’re new to coding or an old hand at it, or if you’re a designer or entrepreneur who wants to make iOS apps, or if you’re just curious, you’re invited to come! We’ll talk about iOS development, go over what you’d like to see in upcoming meetups, and of course, talk about iOS. Bring your projects — we love show and tell! We’ll provide pizza and pop, too.

We hope to see you there!

Special thanks to Jamie Johnson, who’s loaning us the boardroom of his company, Energy Sense Finance, to hold these events!