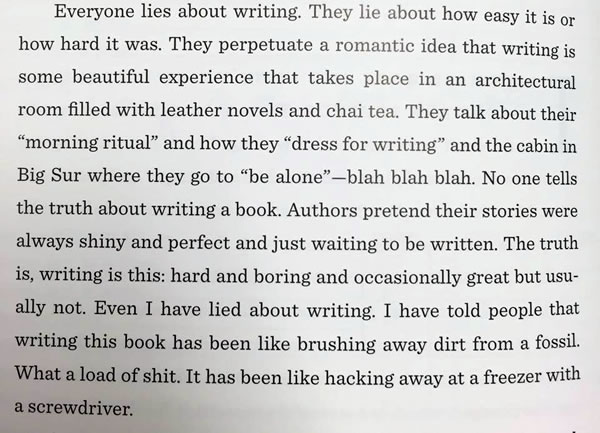 This is from the preface of Amy Poehler’s book Yes Please, and it tells the truth about writing:

Everyone lies about writing. They lie about how easy it is or how hard it was. They perpetuate a romantic idea that writing is some beautiful experience that takes place in an architectural room filled with leather novels and chai tea. They talk about their ‘morning ritual’ and how they ‘dress for writing’ and the cabin in Big Sur where they go to ‘be alone’—blah blah blah. No one tells the truth about writing a book. Authors pretend their stories were always shiny and perfect and just waiting to be written. The truth is, writing is this: hard and boring and occasionally great but usually not. Even I have lied about writing. I have told people that writing this book has been like brushing away dirt from a fossil. What a load of shit. It has been like hacking away at a freezer with a screwdriver.

Coding is romanticized in the same way these days, thanks to the tech success stories we hear in the news, the increasing ubiquity of processors and the rise of the Internet of Things, concerns about job security and being “automated away”…and possibly because coding looks a lot like writing. “You must learn to code!” has been the battle cry of the White House, organizations like Code.org, tech titans, millennial entrepreneurs, and even that homeless guy:

I understand the urge to evangelize coding; in fact, it’s been a good chunk of my career. There’s nothing like the feeling you get when you run a program that you’ve written and seeing a computer or device turn your ideas into action. Even after coding for decades, I still give myself a Barney Stinson-style “self-five” when my code compiles and runs as I expect. 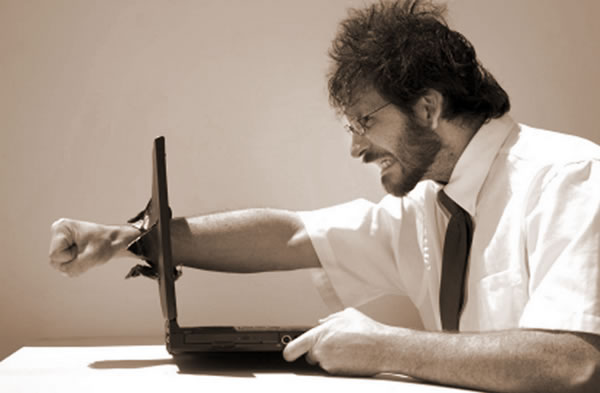 But as with writing, between the initial rush of setting out to code a program and the point that you declare the job done is a long journey of days, months, and even years. That journey has its moments of joy, discovery and wonder, but they’re punctuated with stretches of tedium, toil, and beating your head against your desk (usually figuratively, but sometimes literally) wondering why you can’t get the damned code to work. Like many writing projects, both professional and personal, many coding projects are abandoned. Writing and coding projects are never really finished; “done” is an arbitrary point determined by the writer or coder, and both are left with a lingering feeling that their project could benefit from just a few more changes. And that homeless coder is still homeless:

Thanks to the similarity between writing and coding, I’ve occasionally paraphrased Dorothy Parker: “I hate programming, but I love having programmed.“

Want a coding-themed blast from the past featuring Amy Poehler? Here’s the pilot for a ’90s TV series called RVTV, in which Poehler plays a hacker who’s infiltrated the NRA database. She also breaks into some old-school rap: