After Shit Silicon Valley Says comes Shit Programmers Say. There’s a swear word at the end, so if you’re at an office that doesn’t tolerate salty language, make like the programmers in the video and switch to headphones!

Thanks to Andy Baio at Waxy.org for the find!

This article also appears in the Shopify Developer Blog.

How does a gamer propose marriage to another gamer? If the first gamer is well-connected, he gets a level designer, an artist and the voice actor behind GLaDOS (your cybernetic tormentor in the Portal games) to create a special set of Portal levels (and not simple ones, either) which conclude in a big church-like chamber and GLaDOS popping the question on his behalf. The video above shows gameplay from these levels.

If you have the PC or Mac version of Portal 2, you can take these levels for a spin:

First the zombie-themed engagement photos and now marriage proposal videogame levels. Are these signs of a geek marriage chic trend? 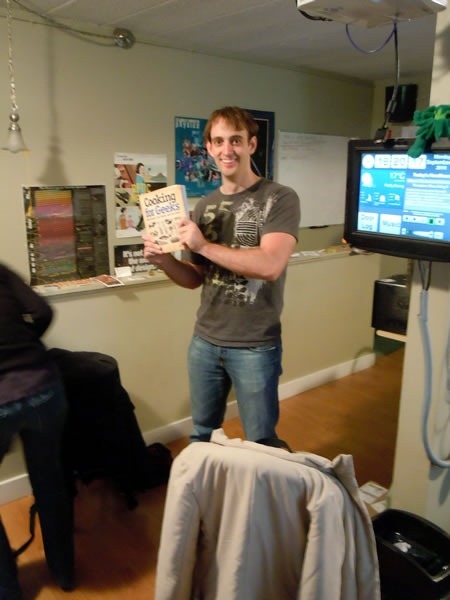 Last night, I caught Jeff Potter’s presentation in support of his book, Cooking for Geeks, at HacklabTO, a hackerspace in Toronto’s Kensington Market. Like most authors, he’s been touring around, promoting the book, but unlike most authors, he’s avoided the usual venues. Rather than talking at bookstores or pubs, he’s been holding his book gatherings in cosier settings such as living rooms and spaces like the Hacklab.

Cooking for Geeks is written with a specific sort of person in mind: one who likes to know how things work. It’s for the science buff who wants to know more than just how to cook the perfect steak, but why that method works. It’s for the tinkerer who wants to convert ordinary kitchen instruments into really cool cooking devices, either because s/he can’t afford those devices or because s/he’s driven to tinker. It’s about giving people the right mental models to understand the processes that happen when we take ingredients and turn them into dinner.

Jeff opened his presentation with a “What Type of Cook are You?” test borrowed from Brian Wansink, author of Mindless Eating, which help you better understand the way you see food and your approach to cooking. It turns out that I’m a hybrid of Type A (the “comfort food” sort of person) and Type D (the “experimental” sort of person). I’m the sort of person who often – but not always — follows the “Law of the Precious and Rare” at restaurants, ordering the thing I can’t get or make at home, or the dish that I haven’t had in ages.

Jeff’s presentation was eye-opening and even inspirational. Leigh Honeywell, who was also there, was so inspired by the part about sous-vide cooking and how you can put together your own immersion cooker by hacking a slow cooker’s thermostat that she’s sourcing the parts as I write this. Perhaps we’ll have tasty sous-vide steaks at Hacklab next week! Thanks, Jeff! 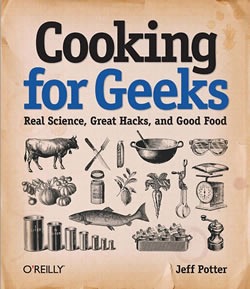 If you missed last night’s presentation and you’re in Toronto, you’re in luck. Jeff’s doing his presentation today (Tuesday, September 21) in two places, and he’s got books for sale as well. He’ll be at:

Bonus! I bought an extra copy of Cooking for Geeks and had Jeff autograph it. I’m going to give it away in a contest of some sort – I just haven’t decided what sort of contest, Watch this space! 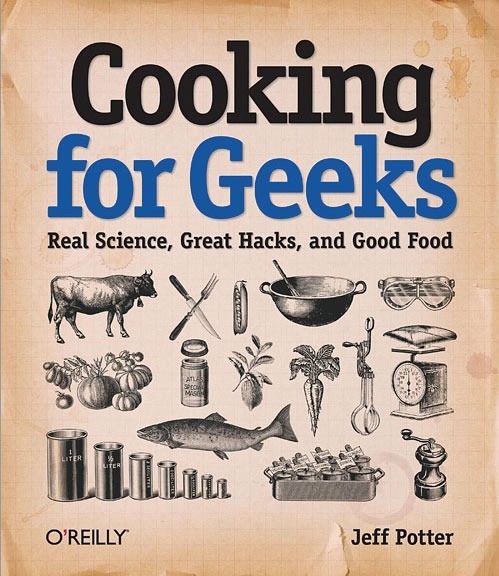 If you’re in or around Toronto’s Kensington Market area tonight, you might want to drop by the Hacklab (170a Baldwin Street, above Graffiti’s) to see O’Reilly author Jeff Potter as his book tour for Cooking for Geeks stops at Toronto’s downtown hackerspace. He’ll be there, talking about his book and possibly treating us to a demo or two, and I’ll be there, helping to host the event. Jeff says he’ll have a number of books on him for sale – but note that it’s first come, first serve, and I’m buying one!

Here’s a video of the author showing you how to make ice cream in 30 seconds (with liquid nitrogen!):

The blog Geeks are Sexy put together a wonderful alphabet rhyme using Creative Commons “share-alike”-licensed photos on Flickr, which I thought I’d share with you:

Here’s the text of the rhyme, along with a credit for each corresponding photo:

A is for Away Team, where you should never wear red (mild mannered photographer)
B is for Binary, 1s and 0s in your head (jpstanley)
C is for Cosplay, making cons an awesome place
D is for Doctor, who keeps changing face (great beyond)
E is for Emoticons, that tell you what we’re feeling (neal gillis)
F is for Flickr, whose photos we are “stealing” (tricky)
G is for Gadgets, the way to our heart (slipstreamjc)
H is for Hardware, I took it apart! (jurvetson)
I is for iEverything, love it or hate it (dan dickinson)
J is for Japan, we’re glad Nintendo invaded (oscar mota)
K is for Keyboard, we love every letter (andrew*)
L is for Leias, the more the better! (koadmunkee)
M is for MMORPGs, it’s a magical place (i eated a cookie)
N is for NASA, and the beauty of space (nasa1fan)
O is for Occipital Lobe, we love using our brains (illuminaut)
P is for Programming, ((though lisp is a pain)) (phil_jackson)
Q is for Quilting, and other geeky crafts (athenamat)
R is for Reading, no matter what the path (timonoko)
S is for Science, though the cake is a lie (don solo)
T is for Tabletop, and a 20-sided die (nengard)
U is for Uncertainty, you just never know (neil crosby)
V is for Voltage, oh the places we’ll go! (oskay)
W is for the World Wide Web, it’s more than just porn (shimown)
X is for Xerox, where so much geekiness was born (marc smith)
Y is for Youth, since kids are geeks too (benmcleod)
Z is for Zork, watch out for the grue! (the_tml)

The comic below, created by John Campbell, is a snarky but amusing deconstruction of Star Trek: The Next Generation:

I always found it funny that the “empathic” character Deanna Troi had the power to sense plainly obvious emotions and painful that they had to explain bits of human behaviour that one should’ve picked up by the end of adolescence. That being said, much of the show’s audience was teenage boys, and teens often figure out the world through stories, so why not explain that stuff? And as someone much wiser than me once said, science fiction is a sandwich: once you’ve gotten past the bread of aliens and future tech and the thin slices of plot meat, it’s all about the thick moral mayo.

The last panels in this comic had me laughing out loud, especially since I imagined the line as delivered by actor (and dater-of-inapproriately-young-women, the lucky bastard) Patrick Stewart himself, using that William. Shatner. Mode. Of. Delivery.

In case it’s not apparent who the comic figures are, here’s a quick guide…

I love this “Drew”-style poster featuring the cast of Mythbusters: 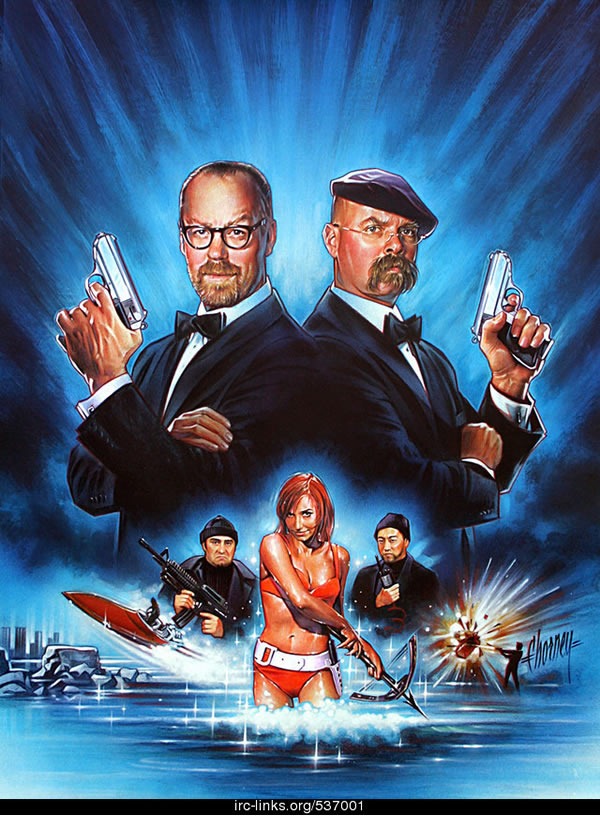 If you’ve been to the movies sometime within the past 30 years, you’ve probably seen a poster by Drew. You can see a catalogue of his posters that were released here; there’s also a page of his “posters that never were”.