Our friends at Imaginet are hosting two-hour events in Vancouver, Edmonton and Calgary where they’ll show Visual Studio developers how to get up to speed with all the goodies that have packed into Visual Studio 2010. Here’s what they’ll cover:

Learn about important updates and enhancements to Team Foundation Server in the 2010 release.  Understand key components such as: Branches as a first class citizen, Branch visualization, and Change set history visualization.  See how using Team Project Collections can improve manageability and scalability.  Imaginet will demonstrate hierarchical work items and typed work item relationships as well as improvements to Team Build including features such as Buddy Builds and Gated Check In.

Imaginet will demonstrate the new testing tools in Visual Studio 2010 and how the generalist tester is now brought into the full Microsoft ALM platform.  The new Test Professional product is a purpose-built tool for test professionals to plan, execute and manage testing of your web, Windows Forms or WFP application.  See how the rich defect reporting including IntelliTrace and other information about the execution and system under test, helps eliminate the “I can’t reproduce the bug” response from development.  Test Lab Management can also assist in streamlining the setup and teardown of test labs for test.

One of the lunchtime demos was a tour of all the goodies in the upcoming Windows Phone 7, which was given by Anthony “The Mobile Situation” Bartolo:

“Windows Phone 7 is HOTT!” You could even hear that he said “HOTT” with two T’s:

And his Windows Phone 7 device naturally had the Jersey Shore soundtrack loaded:

Edmonton is the latest city to be added to the TechDays cross-Canada tour, making for a grand total of 8 cities. Being a new city to the tour and judging by the population, we figured that we should expect about 250 people to attend. The Edmontonian techies stepped up and impressed us by doubling that number! Nicely done!

Here’s Anthony again, doing a turbo talk on Windows Phone Marketplace. He announced to the crowd that although the Marketplace registration fee is CAD$120, if you successfully submit 2 apps before the launch date, we’ll refund it. So start writing those apps!

The deep tech discussions continued in the Ask the Experts area today:

And the OnX folks were there as well, providing internet access and raffling off an Xbox 360:

The whiteboards in the Ask the Experts area were a good place to let your skills and services be known:

When we say “Come to the dark side; we’ve got cookies”, we’re not kidding!

There was more than just the Kinect in the Collaboration Lounge, but a whole host of cool machines from our hardware sponsor, Dell. Many of these machines were equipped with touchscreens to show off touch tech and the touch features built into Windows 7:

The woman in the photo below is playing with a Dell Latitude XT2, my touch-equipped road warrior laptop, standard issue for Canadian developer evangelists on the Windows Phone 7 Champs team:

Here’s the XFR – we often say that it’s short for “eXpressly For Rick”, who’s notorious for killing technology. The XFR is the military-grade ruggedized version of the XT2 and can be dropped on the floor repeatedly without conking out.

This is a Dell 19” all-in-one touchscreen-equipped desktop machine:

Anthony Vranic gives us the lowdown on DirectX and accessing it via managed code. I recommend doing it either with the Windows 7 API Code Pack or if you’re doing games, XNA:

The last session of the last day is always a little challenging. The audience is tired and thinking about going home, and you have to do a little extra to get their attention. Luckily, I saved some interesting presentations for that slot, and got two great speakers. In the Optimizing the Development Process track, my fellow Developer Evangelist John Bristowe used good ol’ jazz hands to liven up his session on Visual Studio 2010 tips and tricks:

“These are not the droids you’re looking for.”

In the Developing for the Three Screens and the Cloud track, Todd Anglin, Telerik’s Chief Evangelist, was giving John a run for his money in the Expressive Presenter Hands contest as he talked about ASP.NET MVC:

And now, more photos of the goings-on at TechDays Edmonton! Here are Barnaby Jeans, Damir Bersinic, Dottie Yeates and John Bristowe having a pow-wow early this morning:

Here’s another shot of Michael Schweitzer talking about the .NET 4.0 Framework in the Optimizing the Development Process track:

At the same time in the Developing for Three Screens and the Cloud track, Erik Jensen talked about Visual Studio 2010 and Azure development:

The presence of the Kinect meant that our audience – techies all, a good portion of whom lead rather sedentary lives – got more than their usual dose of exercise:

Pierre Roman and Rodney Buike take a break during the lull in the hallway that takes place when the sessions are taking place:

The Ask the Experts area was busy with attendees catching up with presenters and asking them more in-depth questions: 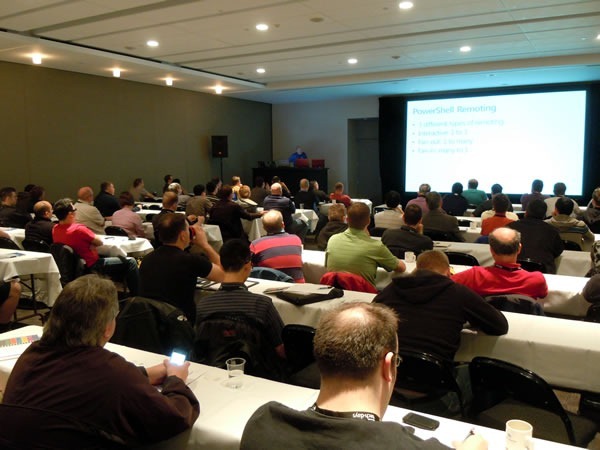 …and Aaron Kowall dropped Entity Framework 4.0 science on the Developing for Three Screens and the Cloud crowd:

After Kevin’s session came what might be the hottest session at TechDays this year – the Windows Phone 7 session. Here’s the crowd in the room a good ten minutes before the session started, with most of the seats already gone:

With a few seats dragged in from other rooms, speaker and long-time Windows Mobile guru Mark Arteaga began his presentation:

Miguel Carrasco of Imaginet was the track host for the Developing for Three Screens and the Cloud track and kept things running smoothly:

…while Mark rocked the WP7 demo:

If you ever need IT pro training, Sean Kearney is your go-to guy. He’s one of the best presenters on the circuit, and delightfully wacky. Just don’t let him have any Red Bull before he goes onstage:

Here’s the crowd at the Team Foundation Server for Everyone session:

Edmonton represent! Mack Male of Paramagnus was the track host for the Optimizing the Development Process track:

Meanwhile, in the Collaboration Lounge, the Kinect games continued to draw in curious onlookers:

We encouraged speakers not to hide out in the speaker prep room and to hang out in open areas like the Collaboration Lounge or the Ask the Experts area, a comfy zone with couches, beanbags and whiteboards. I couldn’t resist drawing a couple of comics. One featured Damir Bersinic, the evangelist in charge of TechDays:

and the other was to let folks know that if they had any questions about Windows Phone 7, they should come to me:

Lunch! Here’s the view from the stage in the “F and B” (Food and Beverage) room:

Along with lunch comes a show – a number of demos of various goodies from the Microsoft platform. Here are Rick Claus, John Bristowe and Rodney Buike setting up for their demos:

In case you were wondering who picked the sessions for the developer tracks – Developing for Three Screens and the Cloud and Optimizing the Development Process – it was me, in consultation with a number of prominent developers in the .NET community. One of my very first picks was Branching and Merging Practices. It’s a topic covered fairly often in the open source world, but I feel it needs more discussion in the .NET world. Tommy Lum from Habanero presented:

Miguel did more than just play track host – he also presented! Here he is, talking about how to build web sites more quickly using Visual Studio 2010:

At the same time in the Optimizing the Development Process track, Michael Schweitzer covered getting the most out of .NET Framework 4.0, which is chock full of developer goodies:

Hello from TechDays Edmonton! I’m spending the week in the home of the Oilers, helping run the developer tracks at Microsoft’s cross-Canada tech training conference for developers and IT pros. TechDays takes the content from Microsoft’s big-ticket conferences – TechEd North America, MIX and PDC – gets local heroes to present that content, and brings it all to a city near you at a price in the low hundreds, not the thousands. For the Canadian developer, it’s the conference that delivers the most bang for your buck!

Here’s the venue, the Shaw Conference Centre, as seen on Monday, the day before TechDays, which had some pretty gloomy weather. It’s cleared up since then:

The conference centre has an unusual shape that takes advantage of its location, a hill on the north side of the North Saskatchewan River:

And here’s the view looking southwest:

The interior of the conference centre reminds me of the domed city in Logan’s Run:

The first session in the Optimizing the Development Process track was Real-World Patterns for Cloud Computing:

Bruce Johnston of Ideaca did the presentation – here are some pics of him in action:

Meanwhile, in the Collaboration Lounge, Anthony “The Mobile Situation” Bartolo, one of my go-to guys for Windows Phone 7, telcos and Jersey Shore, showed us how Kinect Soccer is truly played:

It may look like a blank stare, but don’t let that fool you – he’s simply entering a state of motion-sensing soccer zen

“That was too easy!”

He’s moving faster than the camera can track!

Deployment clinics are a little more formal than Coffee and Codes. You can book an exclusive timeslot to deploy and test apps to a Windows Phone 7 device, and there’s one taking place all day at Microsoft’s Montreal office (2000 Avenue McGill College, 4th floor) on the 30th. Email Christian Beauclair to reserve a time slot.

Coffee and Code Today in Toronto

Compete in Speaker Idol to win a licence of Visual Studio Ultimate and the respect of the Montreal .NET Community! The deadline to subm,it a 200-word abstract and a brief bio for your 10-minute presentation is coming fast (midnight Friday).

TechDays Edmonton is Next Week

TechDays comes to Edmonton next week, taking place on October 5th and 6th, and with it will come CloudCamp Edmonton (October 4th) and Windows Phone 7 Coffee and Code Edmonton (October 7th). Watch this blog for more details!

Edmonton is holding a Code Camp on September 26th, 2009! It’s going to take place at Grant MacEwan College’s downtown campus. There’s a call for speakers – if you’ve got a topic that you’d like to present, now’s the time to let them know. You can find out more at the Edmonton Code Camp site and the YEGCodeCamp Twitter account.