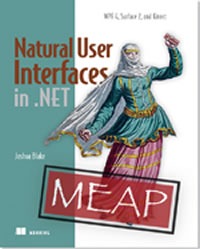 It’s a work in progress, but it’s an important one: Manning Publications’ Natural User Interfaces in .NET, written by Joshua Blake. It’s a primer on creating natiral user interfaces — NUIs — using Microsoft technologies such as WPF 4, Surface 2 and Kinect.

Here’s an excerpt from the publisher’s description:

Natural User Interfaces in .NET is a hands-on guide that prepares you to create natural user interfaces (NUI) and great multi-touch experiences using the WPF and Silverlight multi-touch APIs. This book starts by introducing natural user interface (NUI) design concepts that everyone needs to know. It then quickly moves to the WPF Touch API and Surface Toolkit guiding the reader through a multitouch NUI application from concept to completion. Along the way, you’ll see where these concepts can be extended to Silverlight via its touch interface.

Today only — that’s May 16, 2011 — you can get the MEAP (Manning Early Access Program) preview PDFs, which are updated regularly and the final print edition of the book for a mere USD$25.00 (that’s $24.23 Canadian)! Just enter dotd0516 in the promotional code box when you check out at Manning’s site.

If you’re a developer out in the Maritimes, you might want to check out Derek Hatchard’s Maritime Dev Con, which takes place on June 18th in Moncton. It’s a single-afternoon, two-track conference – which means you should be able to take time out to attend it – covering a number of topics including:

Maritime Dev Con has a registration fee that won’t hurt your wallet – it’s a mere CAD$19!

I’m a big fan of small, regional gatherings like Maritime Dev Con and its western counterpart Prairie DevCon. Each region has its own specializations and needs that a by-locals, for-locals conference can do a better job of serving, and the smaller size of these conferences allows for more back-and-forth between audience and presenter, and between attendees. Support your local conference!

The fifth annual Toronto Code Camp took place on Saturday at Seneca College’s Campus at York University. This was the most ambitious one by far, with the number of sessions increased from 25 to a whopping 40, arranged into 8 tracks.

For those of you unfamiliar with Code Camps, they’re software development conferences organized by the .NET community, featuring community-developed material, for the benefit of the community. Code Camps must be free-as-in-beer to attend, and the content and code in its presentations must be shared, free-as-in-speech style. While a number of business and organizations throw in sponsorship money and swag to help cover costs – The Empire included – Code Camps are powered by volunteers. From the organizer to the presenters to the staff, they do it for free, because they love what they do.

Want to see the full-resolution versions of my photos of Toronto Code Camp? I’ve posted them to this Flickr photoset.

The day opened with ObjectSharp’s Barry Gervin delivering the keynote. I was moving swag at the time, so I could catch all of it, the bits I did catch were pretty entertaining. I expect no less from Barry and the rest of the ObjectSharpies, all of who are top-notch presenters: 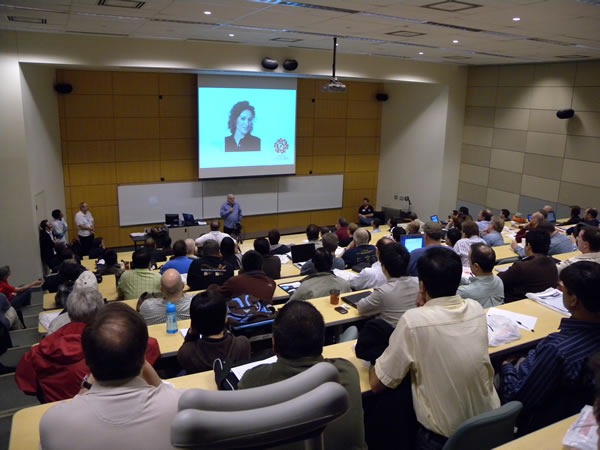 Perhaps I’m wearing out this phrase from overuse, but let me say it just once more: Mark Arteaga of RedBit Development has forgotten more about mobile phone development that I will ever learn. He did the first session in the mobile track, providing an overview of developing apps for the upcoming Windows Phone 7: 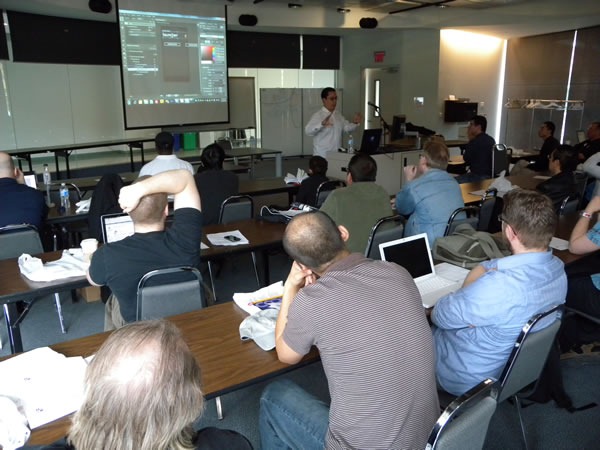 The Empire is quite serious about web development, which is why Internet Explorer’s Big Kahuna Dean Hachamovitch stated very clearly that yes, we believe HTML5 and all the goodies that go along with it are the future. One of those goodies is JavaScript, and nothing turbocharges Javascript quite like jQuery. We love jQuery, and Colin Bowern from ObjectSharp walked a full room through an introductory session: 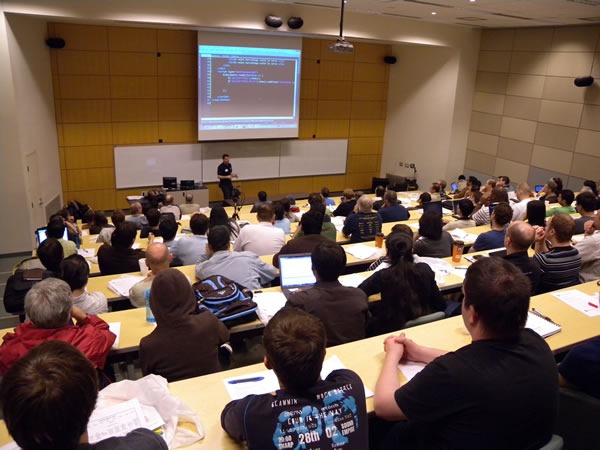 The “Rule of Two Feet” – that is, go the sessions you find interesting and bail from the ones you don’t – is proof that .NET developers care about web development. Here’s a shot of the jQuery session hall, which was standing room only: 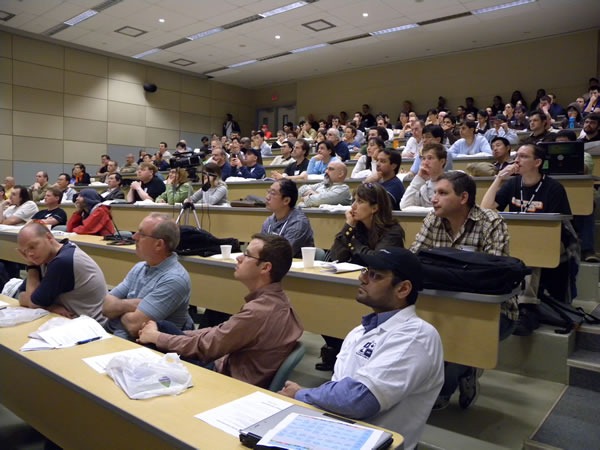 Colin is truly dedicated to the craft; so dedicated, in fact, that he did this presentation even though he was getting married the next day! He’s resourceful too – he used his impeding nuptials as fodder for his presentation, using jQuery to build little mini wedding-planners. Congrats, Colin, on getting married and having a very understanding fiancee! 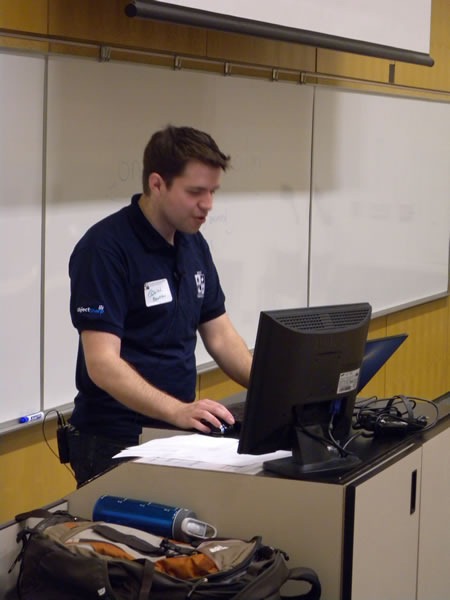 Colin Melia is a rock star. He did some great presentations and an Azure exercise for Techdays, wrote one of the demo apps we used in EnergizeIT and will be helping out at Make Web Not War. He also played to a very packed room at Code Camp with a session on Silverlight Essentials: 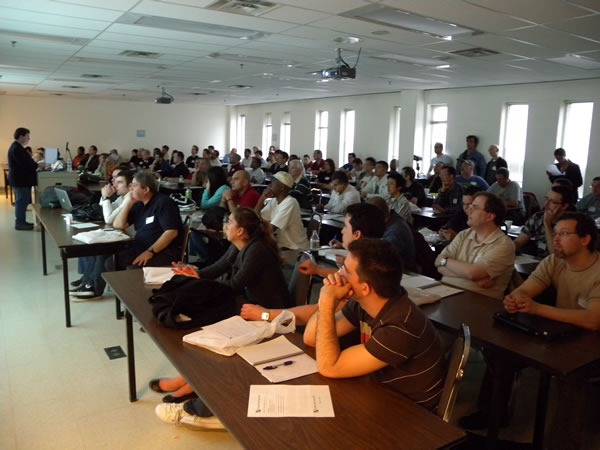 Here’s Infusion’s Nickolas Landry doing a presentation on XNA development. He showed a Space Invaders game with an interesting twist – it was written as a 3D game rather than a 2D one, which opened up some interesting possibilities. I lent him my Xbox 360 controller, which I usually have in my knapsack, which he thought was a little bit weird (Is it? I don’t know any more): 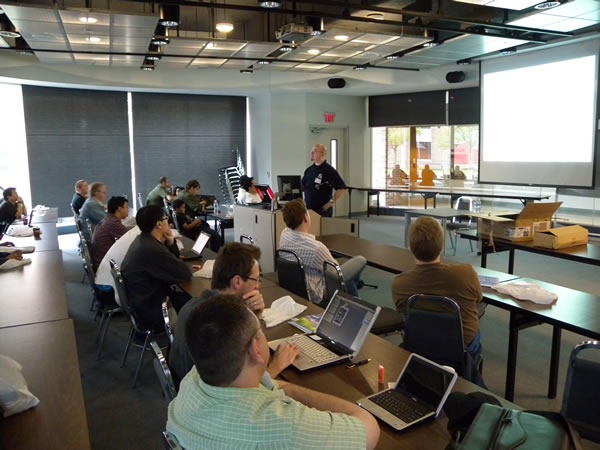 None of this would’ve happened without the dedicated efforts of MVP Chris Dufour, the heart and soul of Toronto Code Camp. Here he is, taking a small breather in the speakers’ lounge: 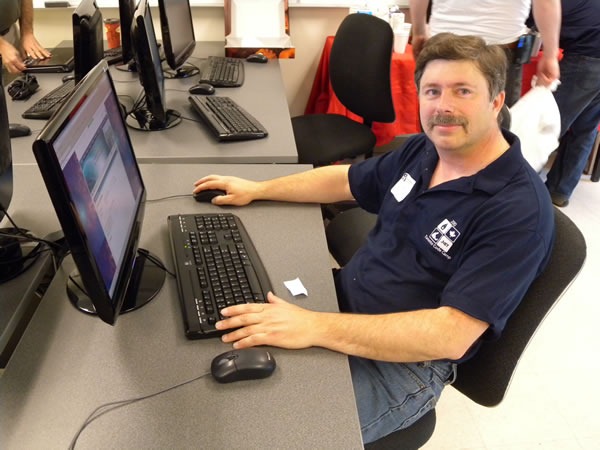 While wandering the halls of the building, I saw something that I thought looked familiar:

Upon closer inspection, it was indeed a familiar object – a “Make Web Not War” sticker, promoting Microsoft’s Web Platform Installer. As you can see, some puny Jedi attempted to remove the sticker, but his piddly powers were no match for the Dark Side! 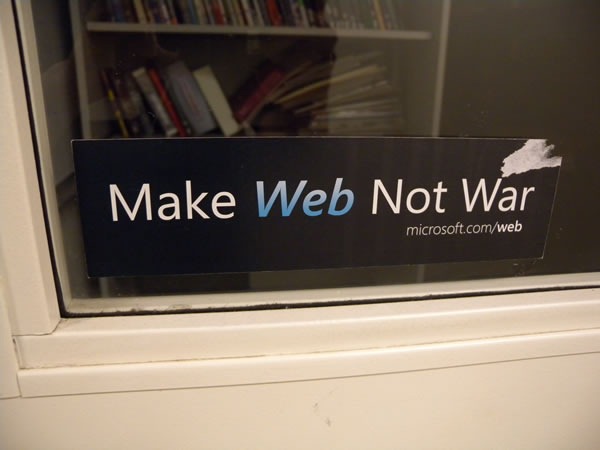 Meanwhile, Bruce Johnson from ObjectSharp was showing the room his “OData face”… 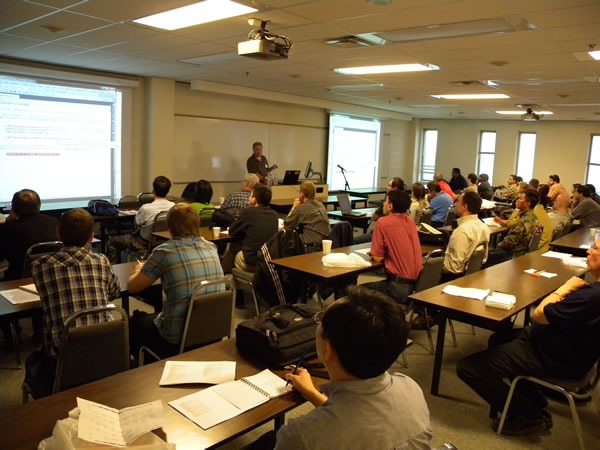 …and while that happened, Ryan was in the lunchroom, valiantly guarding the bag lunches prepared for attendees. 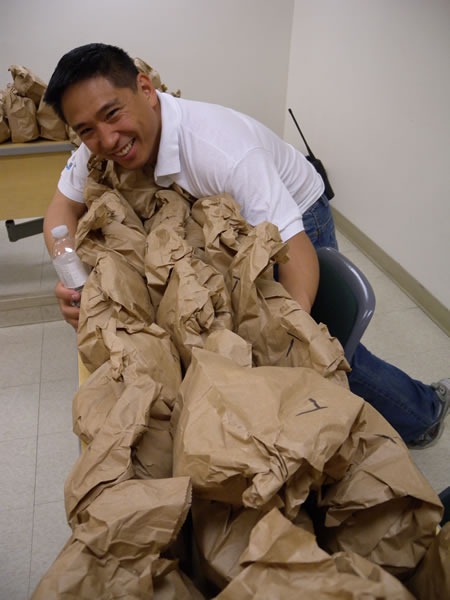 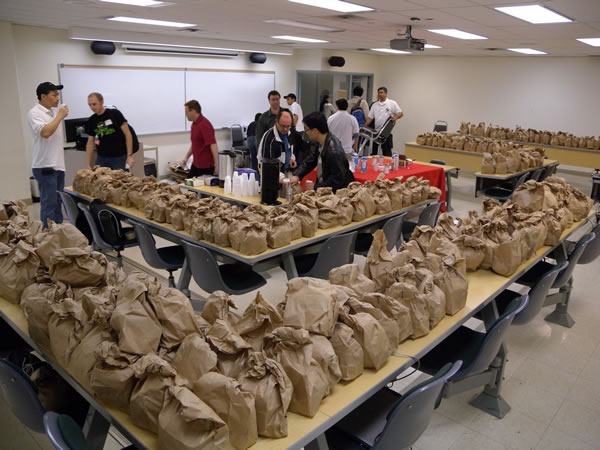 Always controversial is the “Flash vs. Silverlight vs. HTML5 – how do they stack up?” question. Here’s Todd’s answer: 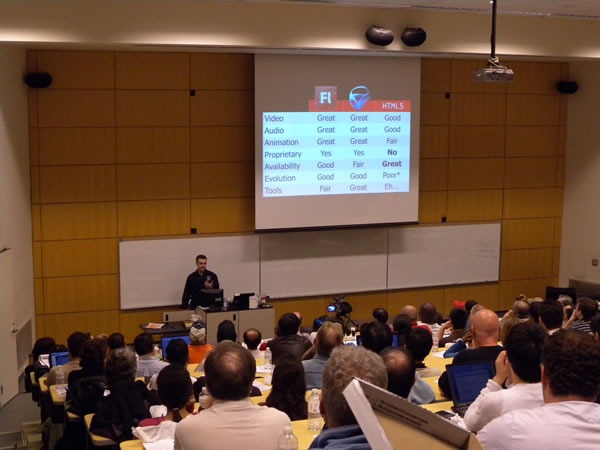 Here’s a close-up. Feel free to discuss this in the comments!

Here are the two closing slides from Todd’s presentation. The first was by Adobe’s CEO Shantanu Narayen:

The consumer should be able to decide which technologies they want to use, but a multi-platform world is definitely where the world is headed. 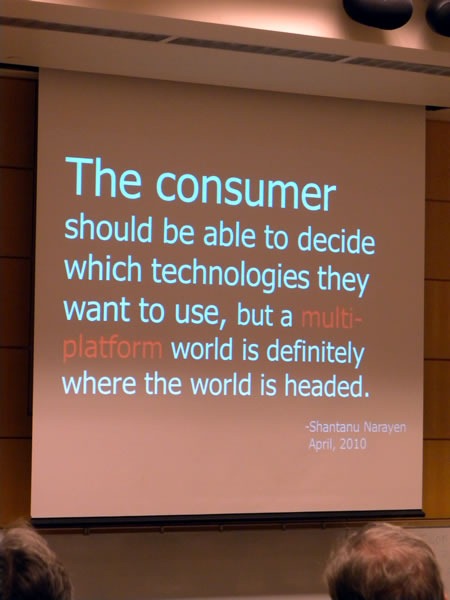 Followed by a quote from Dean Hachamovitch, who agrees with me that:

The future of the Web is HTML5. 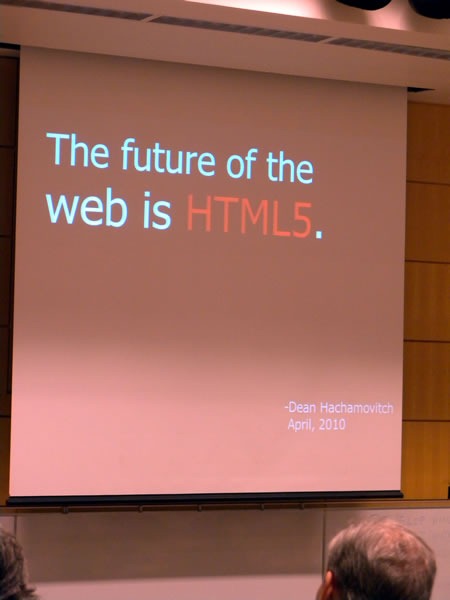 I had a great time watching presentations and talking with people at Code Camp. It’s great to see the .NET community getting together like this, and I’d love to do it again. See you next year!


Don’t have Silverlight? Get it here or download the video in
MP4, WMA, WMV, WMV (High) or Zune format. 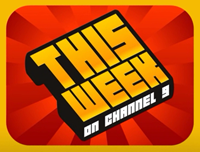 This Week on Channel 9, or TWC9 for short, is a weekly digest show hosted by Microsoft’s Dan Fernandez and Brian Keller covering the developer community news they find most interesting after sifting through hundreds of blogs, videos and announcements. It’s aimed primarily at .NET developers, but if you have any geeky tendencies at all, chances are they’ll cover something that appeals to you!

In this week’s episode, they cover the following topics, summarized in the handy-dandy table below:

The newest beta, Beta 2 of Visual Studio 2010 and .NET Framework 4.0 is out! MSDN subscribers can download it right away, while everyone else can get their hands on it on Wednesday, October 21st (and don’t worry, I’ll remind you if you on Wednesday if you have to wait until then).

This new beta features a number of performance improvements and is your last chance to evaluate a pre-release version before we unleash the final version, so download it, take it out for a spin and give us your feedback!

Beta 2 also features the “Go Live” provision for developers who like living on the edge. What this means is that you’re licensed to download the beta and use it to build production software. If you do so, please drop me a line and let me know! 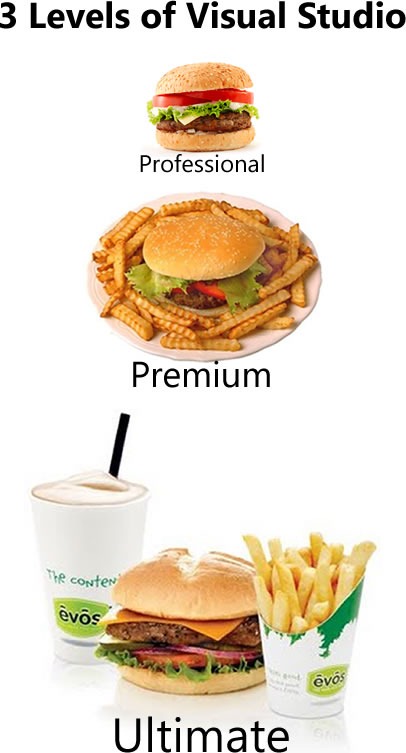 Visual Studio can be bought bundled with an MSDN subscription. I recommend getting the subscription , as it gives you first crack at a lot of tools, access to E-Learning and the Special Offers portal for discounts from Microsoft partners, and – most importantly, as far as I’m concerned – a lot of compute time on the Azure cloud platform.

A lot. To borrow a line from Scott Hanselman, this isn’t “.NET 3.6”, and it’s not just a bunch of features piled onto the current .NET 3.5. This is a .NET that’s been revised based on your feedback. To quote Hanselman again, it’s about “making the Legos the right size”, “about tightening screws as it is about adding new features.”

Some of the goodies in .NET 4, once again courtesy of Hanselman, include:

Alexander McCabe wanted to know the adoption rates of the various .NET runtimes, from .NET 1.0 up to the current .NET 3.5. He took the data from the logs for the website for his quiz-building software, Question Writer, augmented it by including figures published in Joel Spolsky’s Business of Software forum in March 2008, and turned it into the chart below (click on it to see it at full size): 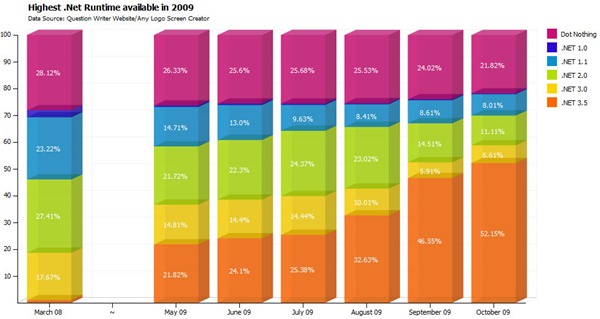 According to the chart, usage of .NET 3.5 among visitors to the Question Writer site has been growing in leaps and bounds since the spring, from just under 22% in May of this year to the current 52%.

Naturally, this data comes with all sorts of caveats:

I should try the same exercise using the logs for Global Nerdy, which has a rather mixed audience of open source, Mac and Microsoft types. I wonder how different the results would be. 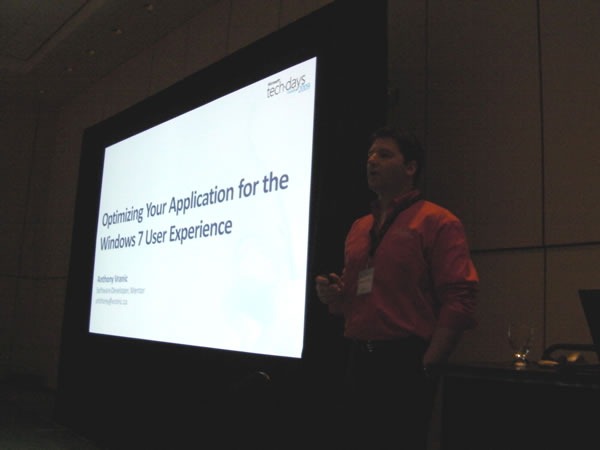 My photos from Anthony Vranic’s session at TechDays, Optimizing Your Application for the Windows 7 User Experience, are a bit dark because I used a different camera; my main camera was on video recording duty. I’m including them anyway, because I’m trying to keep a complete record of TechDays. 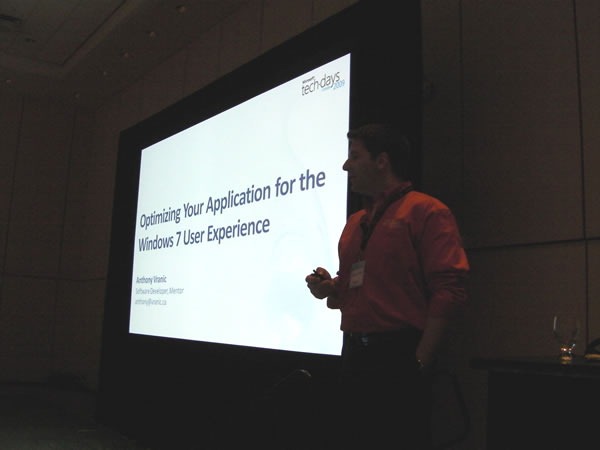 The original version of this presentation from TechEd North America is somewhat different – its target audience was C++ developers, and TechDays is more of a managed code audience. Since the original TechEd presentation, Microsoft released the Windows API Code Pack for the .NET Framework, and Anthony added it to his presentation.

The Windows API Code Pack for .NET gives managed code access to a lot of features, including some new ones introduced in Windows 7, such as: 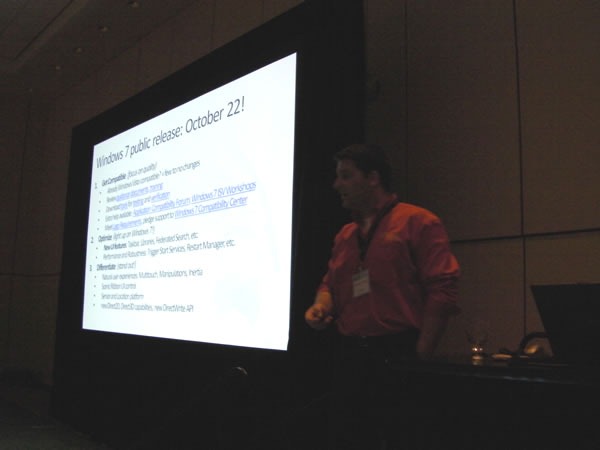 Watch this blog – I’ll posting some example code for the Windows API Code Pack for .NET in the coming weeks!